Mere months ago, New Republic armed forces launched “Operation Bellum”, a war exercise devised to provide combat training and to further improve cooperation between officers across the respective branches of the NRAF.

The target locale of Operation Bellum was the planet Serocco; a planet located in the Ploo sector harboring a diverse series of biomes, rendering it optimal for ground combat training in a variety of tactics in different environs. It was here that pilots, crewmen and soldiers from the NRAF converged to begin what was to become a grueling training regimen and eventually, an actual battle.

The main exercise consisted of a series of peacekeeping actions targeting hostile criminal and raiding groups in an effort to safeguard local citizens from violence and lawlessness on the fringes of civilization. The NRAF was also commissioned by the local government to reduce the population of dangerous fauna in various hotspots around the globe. These actions were carried out jointly by two separate Battle Groups. In an effort to promote morale and encourage teamwork, Command scored the entire exercise based on coordination and strategic implementation within each Battle Group. Command particularly recognized Captain Daehd Moroz's impressive military prowess, which allowed elements in his battle group to secure their area of operation with a high degree of efficiency. 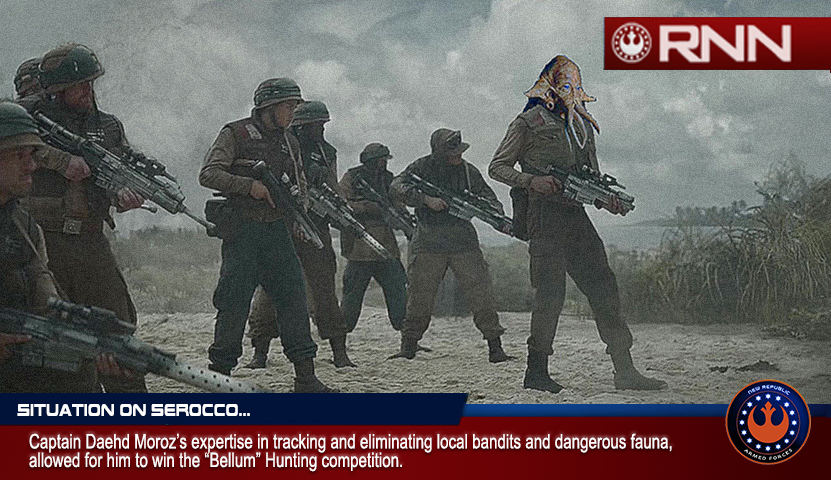 During the exercise, Tresario Star Kingdom forces deployed from the Super Star Destroyer, TMS Tresario, which orbited around Serocco. Shortly after its sighting, soldiers from the Tresario Star Kingdom, led by none other than Kevin Wolff, descended from orbit and ambushed the already beleaguered troops in multiple rounds of fierce fire fights that occurred over a period of three days. Through the establishment of open supply lines and effective communication, the NRAF rapidly assembled and organized a defensive position to offer sufficient resistance to the enemy attack and minimize allied casualties, despite the TSK’s fully trained troops and aggressive tactics. Equip with only training squads, NRAF forces were able to hold TSK forces back. Eventually, the conflict ended in a stalemate and the Tresario Star Kingdom withdrew from the field, providing the NR soldiers much needed relief. 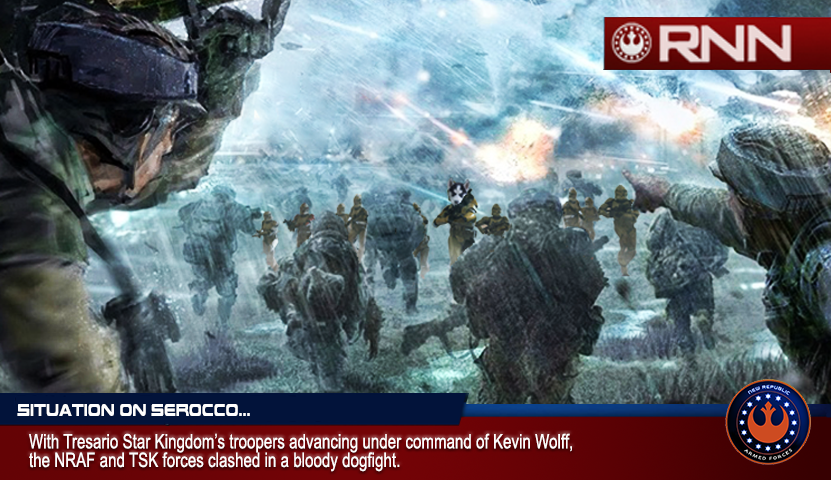 Following the ground combat, a naval exercise had been set up for both battle groups to continue their fight in space. This time the main objective contained a “missing” bulk planted in one of Serocco’s nearby asteroid fields seemingly captured by nearby space bandits. If one was to succeed in finding this bulk their team had won automatically. Additionally to the finding of said bulk, a kill competition was held as well. Allowing for a certain SFC pilot, Liviana Iota, to show off her first flight skills and claim the most points. However it was due to another pilot, Seth Wrenstar, having found the hidden bulk, That his battle group was allowed to claim victory. 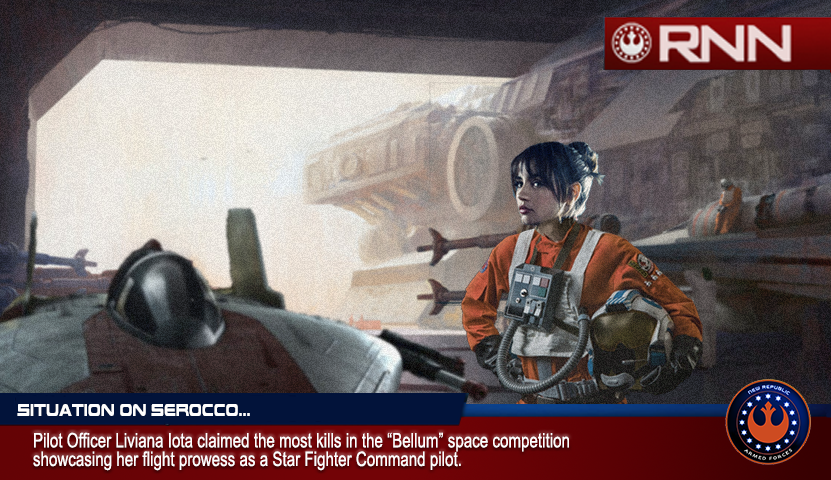 Despite fatigue, Bellum was not without its heroes; tales of the NRAF’s exploits have filled the airwaves, from the brute determination of the Army and the surgical precision of the Navy to the steely-eyed bravado of Starfighter Command. One particular account of the battle recounts the heroic exploits of a Republic Medical doctor that was attached to a unit to provide medical care and document the physical effects of stress and combat fatigue on soldiers in battle. Prior to the engagement with TSK, an SFC pilot found himself severely wounded and cut off from his transport and issued a distress call. The doctor, upon receiving the distress call, advanced to the pilot’s position and once arrived, successfully administered medical treatment and simultaneously defended himself and the pilot from the local fauna that advanced on their location.