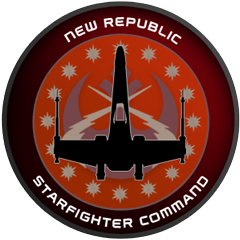 While the Navy wages its battles in space, there is a group of pilots who dart around the large capital ships, defending and attacking all at once. They thread through impossible gaps, lead their snubfighters head-on into a volley of lasers, and duel other enemy aces to the death. These brave pilots are the sentients who make up Starfighter Command. Widely regarded as the heart of the New Republic Military itself, the esteemed Starfighter Command dates back to the origins of the Alliance to Restore the Republic. Winning battle after battle against impossible odds, the ubiquitous X-Wings, lightning-fast A-Wings, and hard-hitting B-Wings of SFC have carved their place into Galactic history. It takes courage to lead a squadron against capital ships that could tear a hole in your craft with one hit, but these pilots have proven time and time again that you can't kill what you can't hit. So, how about it: are you brave enough?

Though designed at the beginning of the Clone Wars and more than twice the age of the average pilot, the Y-Wing has remained in service due to both the sheer number of ships manufactured and its versatility as a medium bomber, although it is currently being phased out of military use in favor of the New Republic's more modern fighters. The one distinguishing factor that continues to make the Y-Wing a force to be reckoned with is the turret-mounted Ion Cannons, which offer a firing arc over the entire dorsal dome. The level of endurance in combat and unique ion-cannon configuration makes the Y-Wing a capable escort fighter and it can hold its own against even the most determined TIE attacks. It can often join A-Wing and X-Wing fighters in clearing the area of fighters, transports, and small capital ships.

Perhaps the most widely recognized of the New Republic starfighters, the X-Wing is the ultimate in space-superiority design. It has the power and the speed to make it a dangerous foe on the battlefield. The hull and shields on the X-Wing are decent, but it more than makes up for it in speed and fire-power. With 4 heavy laser cannons and 2 missile launchers, it is the Imperial captain's nightmare. When paired with the Republic A-Wings and B-Wings, an unstoppable force is created. Normally sent out to kill enemy fighters, a duty in which it excels, it can also be sent on surgical strike and escort missions. X-Wing squadrons are usually lead by junior officers.

The A-Wing is considered by many to be the best interceptor in the galaxy; some go so far as to even suggest it is the best starfighter, period. The fastest ship in the galaxy, the A-Wing relies on its speed and the skill of its pilot to avoid enemy fire. A-Wing squadrons, normally led by senior officers, are a nightmare for Imperial starfighters; so much so that the Empire has spent considerable resources on developing an answer to the A-Wing, to no avail. A-Wing missions run the gamut from recon to escort to dogfighting; there is little this starfighter can't do.

One of the newest additions to Starfighter Command, the B-Wing is the heavy bomber of the Republic. It combines speed, maneuverability, and raw fire-power into a deadly package. The shields and hull are very tough, and its speed is good for a fighter carrying this sort of weight. The weapons on this ship out-gun even some of the best military transports. Its aforementioned maneuverability comes from its gyro-pod, a new system that allows the pilot to roll the ship around the pod itself, keeping the pilot stable, while still dodging incoming fire. Being one of the most difficult starfighters to pilot, it is usually reserved for senior officers who have proven their skill.

If you have anymore questions, please contact your SFC liaison. The SFC liaison is available by DM and on our IRC channnel, #cmg-nr-academy.