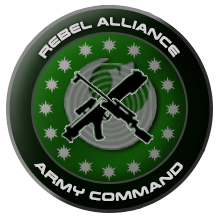 Standing firm against the oncoming storm, the brave men and women of the Rebel Alliance's Army Command are known for their excellence on the field of battle, whether they are called upon to siege a planet, assist their comrades from different branches or defend holdings against the enemy. The forces of the Rebel Alliance Army are a diverse group made up of varied and highly trained soldiers, often called upon to fill multiple roles whenever the heat of battle calls for it.

Whether on the lush forest world of Kashyyyk or the rolling sand dunes of Tatooine, the Rebel Alliance's brave soldiers are prepared to stand with resolute hearts and steeled arms against the tyranny and lawlessness of the Rebellion's enemies.

Do you have what it takes to be a Rebel Alliance soldier?

If you have anymore questions, please contact your Army liaison. The Army liaison is available by DM and on our Discord Channel.

There is a lot more to Army than just picking up a rifle and firing in the general direction of the enemy. The Army contains five assignments, and many more specializations should you have the necessary skills. Below is a brief summary of the assignments.

Infantry units form the backbone of the Rebel Alliance Army. Blaster rifle in hand, the infantry soldier fights shoulder to shoulder with their comrades. Infantry soldiers themselves are split into two major groups dependent on their equipment and role on the battlefield. Standard infantry are the main force used to take and hold key positions on the battlefield. They are often supported by heavy infantry, who use their anti-materiel weapons to take out enemy vehicles and fortified positions. Infantry also fields countless other units, among them snipers and sappers; chances are you'll be able to find something for you!

Sometimes, infantry alone can't hold against the enemy; this is when the superior firepower of mechanized units is called in. Operating tanks such as the battle tested TX-130 Saber-class, mechanized units support infantry by crippling enemy vehicles and destroying large, clustered groups of infantry.

Despite what they will try to tell you, SFC aren't the only ones who get to fly fast moving vehicles and bomb enemy positions. Army has their own, in the form of air support units. Using the famed T-47 Airspeeder and the heavy-hitting V-Wing Airspeeder, air support is able to clear the path for ground units to land and make their way towards their objectives.

Before any fighting can be done, soldiers and equipment have to arrive at the battle quickly, and unharmed. The logistics branch is responsible for ensuring the safe arrival of all non-hyper capable craft (and the soldiers themselves) to their destinations. The life of an army logistics pilot isn't all just cozy flying - this is Army after all - and they can be called upon to transport soldiers and equipment straight to the front lines under enemy fire, either in the venerable GR-75 Medium Transport or the nimble Delta-Class JV-7 Escort Shuttle.

Battles aren't always just won by sheer numbers and force; often times, it's the side that is able to return and keep their soldiers on the front lines that ends up victorious. This philosophy has led to the creation of a dedicated combat medic team. Though often times stationed in capital ships or behind friendly lines in a field hospital, it is not uncommon for a medic to administer first aid on the battlefield if needed. Often overlooked, it is the medic who ensures our injured troops make a full recovery and live to fight another day.