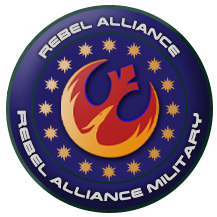 The Rebel Alliance Military (RAM) is responsible for the defence of the Rebellion, her ideals and her citizens. We are pledged to defend freedom in the galaxy and to liberate those subjugated by the forces of tyranny.

The Armed Forces are made up of: the Army Command, the Naval Command, and the Starfighter Command. They are run by High Command, and overall charge of the military falls to the Chief of Military Operations (CMO). He or she is responsible for providing orders to the Battle Groups, overseeing the administration of all branches of the Military and coordinating and delegating authority to the military Rebel Alliance Council members. The Command of the Military is composed of three groups: Senior High Command (Chiefs, GCOs, Special Advisors, and RAI); High Command (GXO, and Advisors); and Junior Command (BG COs and XOs).

The Deputy Chief of Military Operations (DCMO) is the Second-In-Command (2IC) of all military operations of the Alliance to Restore the Republic Military. He or she is a amember of senior HC, and RAC; in charge of training officers; in charge of assigning new officers to BGs; oversees progress of military officers ensuring that recognitions, awards, and promotions are timely awarded.

All branches and departments follow the Military Rank Chart and the unified Payscale.

Core Values and the Military Covenant

The Ethos of the Rebel Alliance

That spirit which inspires soldiers to fight. It derives from, and depends upon, the high degree of commitment, self-sacrifice and mutual trust which together are so essential to the maintenance of morale.

The Values of the Rebel Alliance Military

Selfless commitment
To put others before yourself
Courage
To do what is right no matter the circumstance
Discipline
To maintain the highest standards, so that others can rely on you
Integrity
To earn the respect and trust of your comrades
Loyalty
To be faithful to your comrades and your duty
Respect for others
To treat others with decency at all times

Officers are bound by service. The nature of service is inherently unequal; officers may have to give more than they receive. Ultimately, they may be called upon to make personal sacrifices, including death, in the service of the Republic.

In putting the needs of the Rebellion, the Armed Forces, and others before their own, they forgo some of the rights enjoyed by those outside the Armed Forces. So, at the very least, Republic officers should always expect the Republic and their commanders to treat them fairly, to value and respect them as individuals, and to sustain and reward them and their families.

This mutual obligation forms the Military Covenant and is binding in every circumstance.

The Rebel Alliance Military is responsible for protecting the Alliance to Restore the Republic or simply Rebel Alliance and her ideals and freeing sentients around the galaxy from the tyrannical grip of the Empire and its allies. Whether it be directing troops into battle with Army Command, leading a squadron of snubfighters with Starfighter Command, or commanding a fleet of capital ships with Naval Command, you can be sure you'll be doing it with the best military officers in the galaxy who have received some of the best military training there is to offer. There is a place for you in the military, regardless of race, gender, and upbringing; the only thing we ask in return is that you give it your all.

So, do you think you have what it takes to join?

Please select one of the following images for more information on each specific command: 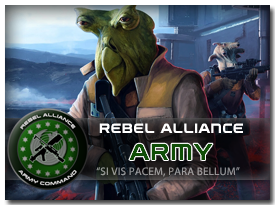 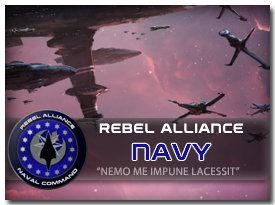 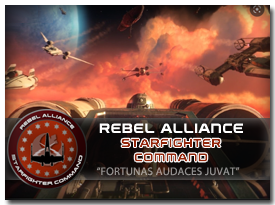