From Rebel Alliance Wiki
(Redirected from Chief of State)
Jump to: navigation, search 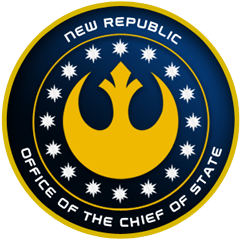 See History for leaders of the Rebel Alliance and Sorosuub Corporation prior to the merger.

On Year 8 Day 121, following a strongly contested but gentlemanly election campaign the first Chief of State of the New Republic was confirmed as:

Due to a catastrophic series of technical problems and engine failures Maradin was stranded in the outer-reaches and unable to perform his duties as Chief of State as he would wish. While he was incommunicado his second in command, Minister Phymp Mindano, took the reigns and exercised his extensive leadership experience to guide the New Republic.

After a hard fought and controversial election, in which several candidates dropped out and others entered the fray late, the second Chief of State was elected:

Ingo R. Vailis' tenure was marked by immense controversy over his illegal efforts to sell the Black Sun to Teniel Djo and the influence of Adam A Flynn. After a long period during which only a handful of aides had contact with Vailis, the Senate and Advisory Council passed a Vote of No Confidence in him; Vailis subsequently launched a brief coup. Minister Gawayne served as interim Chief of State, before being replaced by Minister Phymp Mindano who lead the New Republic through it's darkest days.
In the subsequent elections, no candidate obtained a majority in the first round, leading to a second round between Minister Phymp Mindano and Chief of Military Operations Edhrikhor Tlakh`sar. The runoff election was narrowly won by Edhrikhor, making him the third Chief of State.

Under Edhrikhor's leadership, the New Republic stabilised and flourished. Edhrikhor spearheaded a production spree, helping the New Republic Fleet to replenish its losses from the coup several times over, led several pushes against Imperial expansion, and encouraged a number of neutral governments to join forces with the New Republic in it's war against the Galactic Empire. His tenure also saw the expansion of the Galactic Alliance. Edhrikhor became the first Chief of State to complete a full term, and did not seek reelection.

On Year 10 Day 12 the fourth Chief of State of the New Republic was elected:

Under Traner's leadership, important changes in several sectors took place. Regarding the economy, the tax planet at Belecalaryn was completed, wages were increased, and the Trade Bursary programme was reopened for the NR citizens. However, the most impressive action was the mergers of different but similar companies, carried out to streamline the processes and increase the level of cooperation among all the parties involved. This led to a lot of changes in the AC, Ministers, and Associate Ministers. A new position was also created: the Executive Employment Administrator. Moreover, CRI renovated its inner structure.


Regarding the military, the reorganization involved mainly the Army, and a new Battlegroup was created.


Traner's administration saw also the looting of Astralwerks Engineering and its renewed management under the name of Noga-Ta Industries, as well as an unfortunate event balanced by the quick response and support to one of the GA members, The Antarian Rangers struck by BS.


Like his predecessor, Zeff Traner completed a full term as CoS, and did not seek reelection.

On Year 11 Day 6 the fifth Chief of State of the New Republic was elected:

Aves was born on the planet of Corellia, on Year -19, Day 329 to Nolween Sunfell and Mindana Pesh Sunfell. He was the first child of the family but when he was two his little sister was born, Minati Sunfell. His father was a respectable trader on Corellia.


Graduating on the RA academy, Aves was appointed in the Star Fighter Corp and made a Flight Officer in the BG he was assigned to. He staid there and performed his duty well, rising up through the ranks until he achieved the rank of Captain on Year 9, day 271.


When Adam A Flynn and Ingo R. Vailis took over the New Republic, Aves participated in the rescue operations of some of his battlegroup members. For his assistance to rebuild the New Republic assets after the coup, he was awarded the Master Builder's Award.


At the Sixth Session of the Senate, Aves secured himself a seat at the senate. A few months after, he was promoted to Wing CO of his BG. Little time after that, he was appointed as BG XO for his BG by High Admiral The White. In the meantime, he was also appointed as SFC XO and promoted to the rank of Marshal by High Marshal Daigle. A few weeks after this appointment, High Admiral The White passed on the leadership of the BG to him.


Running in the Fifth Chief of State Election, he won the seat on a run-off between himself and Jake Azzameen, on Year 11 Day 6.

On Year 12 Day 17 the sixth Chief of State of the New Republic was elected:

Taka Aioko worked exclusively in civil sectors, and covered many positions leading several nationalised factions, eventually becoming Minister of State. He calls himself a man of action, and was awarded two Outstanding Excellence and two Hydian Star of Excellence medals. As Minister of State, he worked in the restructure of the NR organisation and was appointed Second in Command of the New Republic. Before his election to CoS, he commanded successfully an operation aimed at liberating the planet Sacorria from CorSec, for which he earned the Perlemian Star of Freedom.


During Aioko's administrations, the New Republic prospered, saw several key victories, discovered and colonized a new system, and brought about a new era of cooperation with her allies through the Galactic Alliance.

Cheda Quche began his New Republic career in the SFC, rising to the rank Lieutenant (now Flight Lieutenant) before branching out and taking up positions at the NR Academy and at the New Republic Diplomacy Command. He eventually became Dean of Military Studies before his resignation in Y12 and High Ambassador of the New Republic. Quche has also served as both Secretary General of the Galactic Alliance and as Deputy Chief of State under the previous administration. Quche has received many citations and awards during his career, among them the Perlemian Star of Freedom, the Hydian Star of Excellence, the Chief of State's Medal, and the Outstanding Excellene award (three times). Cheda Quche entered the running for the seventh Chief of State, and defeated Andrew Harris in a closely contested run-off election.

Azzi Blackgate has served in almost every part of the New Republic, starting out in SFC and eventually branching out to the Army and every civilian department in the New Republic. Blackgate has a practically unmatched wealth of experience in the New Republic, having served previously as Minister of Trade and Industry, High Ambassador, Director of the Center of Republic Intelligence and Minister of State as well as being a Senator twice and a Knight of the Republic, he's also earned many medals and accolades in his career, notably the Perlemian Star of Freedom, the Hydian Star of Excellence and Superior Service Award. After his predecessors untimely demise, Azzi Blackgate ran for election as the 8th Chief of State and won, defeating Andrew Harris and Azriel Pitot, after gaining exactly 50% of the votes in the first round and Andrew Harris pulled out of the ensuing run-off.

Lukas Narvaka rose quickly through the ranks in the Navy. This had partially to do with his experience in the galaxy where he had led some groups. Before he became Chief of State he was elected Senator. Followed by being appointed the Director of the Intelligence service and during that time Governor of Callos. He was later moved to the position of Chief of Navy before winning the Chief of State election with 70% of the casted votes.

Some of his awards include the Hydian Star of Excellence, NRI Director's Citation, Chief of State's Medal and Group Commander's Citation to name a few.

Kara DuMonte started her military career as an SFC officer on Year 9 Day 149. There she received her nick name “Doomer”. Around Year 10 Day 149 she had joined the Jedi Order after being found force sensitive. She had left the Republic for a short period before returning and re-entered the military as an Army officer. Being part of the Intelligence service she rose through the ranks swiftly till she reached the rank of Director. She was also a Senator in the 14th and 16th session. She won the Chief of State election with 73% of the votes on Year 15 Day 3.

On Year 16 Day 161, the eleventh Chief of State of the New Republic resigned, and Orion Chran was installed as Acting Chief of State to oversee elections.

On Year 18 Day 3, Orion Chran was elected as the New Republic's thirteenth Chief of State.