A highly skilled assassin and operative. Trained by his father and mother since childhood, and honed into the perfect physical weapon. He learned self-sufficiency, piloting, marksmanship and hand-to-hand combat, and the ability to find a way out of many a difficult situation when needed. There was only ever going to be one choice for his career path. With the helping hands from his parents he easily followed their careers onto the military path within the New Republic. During one of many tours of duty he was to find out his parents had been killed in a suspicious piloting crash, although some say they were murdered intentionally to keep diplomatic top secret plans from getting out. His parents deaths left him devastated, and for a few years his life was at rock bottom staring down empty bottles of his fathers Corellian Whiskey reserve.

Then a chance meeting came with an old Army buddy who was now Special forces and knew that Leebri was one of best and was wasting his many talents. The Army friend got Leebri back on track and within 6 months Leebri was tested again for the Elite section of Army command which he passed with distinction. Leebri threw himself into his work within the Army's special forces once again and quickly climbed the forces ranks due to his special skill set, bravery and determination. He was becoming revered amongst his men and superiors in the New Republics senior high command. He felt at home again.

During a scheduled recon assignment to check for a safe area for Kerdos Company to come in and recycle some old enemy sites, he had a chance meeting with the Kerdos Leader, at the time, Kristina Roberts.

As soon as he saw her his life changed slightly, she was the most beautiful women he had ever seen and he just knew she was the one. They clicked instantly and her smile took his breath away.

Time permitting for military leave, he spent every spare hour he could with her and they were married the next year. 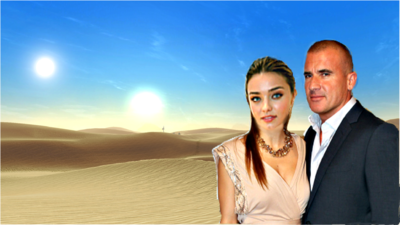 A year after that their beautiful baby girl Bailiey was born.

Bailiey initially followed in her fathers footsteps before deciding the Army wasn't for her and moving away to follow her dreams of one day becoming a successful business woman.

With Bailiey leaving it brought tension to the family home and during one of Leebri's operations away, Kristina packed her things and left. Never to be seen or heard of again.

When Leebri returned, the home was empty. No note, no explanation. This affected Leebri deeply and all he could do was throw himself into his Army career again, taking on bigger and more dangerous operations each time.

He survived two tours of the Derra wars, which turned him into an unrepentant killing machine.

Loosing many friends to the empires cold killing hands, Leebri found himself doing the same. Upon the final day of second war Leebri looked out over the battle fields and came to realize what he had become, and the anger he felt.

It was also during this tour Leebri caught a Derra Virus, unexpectantly changing his born race from Corellian to Mirialan. He decided to keep his new race and felt this was time for a new Leebri.

Returning to his homeworld, he sold virtually everything he had built up with Kristina except the company business based at Gazzari. He checked himself into rehab for a few months before leaving refreshed and ready to face the world again. Leebri made contact with his daughter Bailiey and offered her the job of running the family business. Bringing them back together again.

Leebri returned to the Army after his ELOA and once again found the love he had for the Army. He designed, built and ran a special training exercise called Lone Survivor which is still used to this day. He also helped build a New Republic reserves unit. After many more operations, rescue missions and battles Leebri was offered the role of High General and Chief of the NR Army. To which he still holds today.