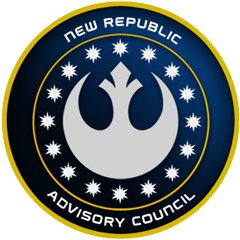 The Advisory Council is a constitutional body comprising members equally split between military and civil leaders, and a total of no more than ten members. It is chaired by the Chief of State. The Council supplies the Senate and Chief of State with economic development, military, trade and commercial, legal, diplomatic, and intelligence advice. The Council members are responsible for decision-making within their respective departments, but the Council itself is not a decision-making body.

The Chief of Military Operations, Minister of State and heads of these departments comprise the New Republic Advisory Council. Running their departments on an operational level, they provide expertise and advice to the Senate and Chief of State.