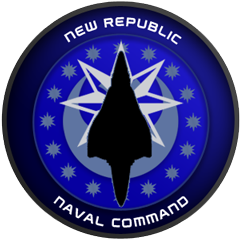 Though SFC may capture the populace's imagination through their daring antics and Army may be the ones hoisting the victory flag over the field of battle, it all begins, and ends, with the Navy. The proud officers of Naval Command are the ones who captain the Republic's capital ships, from the relatively small Sabaoth Destroyers to the massive Home Ones. Each capital ship is a mobile base, housing several fighter squadrons within their cavernous docking bays, allowing them to refuel and repair in the midst of battle, and more often then not providing the point of origin for Army's descent to the ground. They must do all this while forming battle lines with their ships in space and directing massive amounts of fire toward enemy vessels.

Naval officers must be able to envision the battle and direct ships and squadrons to key positions, all while maintaining a calm demeanor under fire. And when the time comes to defend the ship from boarders or capture a prize, Naval Marines are called up to do vicious close-quarters fighting in cramped quarters. Finally, once the fighting is done, Navy remains in the area as a deterrent to further aggression. The job of a Naval Officer is not for the faint of heart; do you posses the inner strength needed for the Navy?

New Republic Naval Command: No One Attacks Us With Impunity

Classification: Destroyer Description: As part of an exchange program, the New Republic acquired several Sabaoth Destroyers that are now in service. Though small compared to most other capital ships, the Destroyer's array of heavy weaponry has earned it a powerful reputation. Normally captained by junior naval officers, the Sabaoth is frequently used to transport troops to the ground when the landing zone may be too hot for a smaller, fragile craft.

Classification: Heavy Cruiser Description: The MC-80b is a heavily modified MC-80a that trades its docking space away for better weaponry and speed. Both modifications make it a dangerous foe on the battlefield, and thus these ships are always a valuable asset in the hands of the New Republic. Their weaponry and armor allow them to take on and defeat the renowned Imperial Star Destroyers. These ships usually serve as the backbone of the New Republic Navy, and are mostly seen piloted by senior naval officers.

Classification: Command Ship Description: The MC80 Home One Class Star Cruiser is the pinnacle of Mon Calamari engineering. Equipped with an impressive amount of turbolasers, heavy lasers, proton-torpedo launchers, and ion cannons, the Home One is capable of destroying most any capital ship, while being able to fight fighters and freighters as well, a clear advantage over all other Mon Cal ships as well as the Imperial and Victory Star Destroyers. The Home One also offers a huge docking and hangar bays, allowing it to field huge amounts of fighter squadrons and a sizable ground force. These ships are most often captained by members of command.

More often than not, Naval officers found that they needed troops to defend their capital ships, as well as capture enemy ships or enemy combatants on board capital ships. Naval crews were more than capable at defending themselves in case of boarding, but this could take away from their on-ship duties, which lessened the combat-effectiveness of the ship. Though the Army gladly loaned troops to serve on board capital ships, Naval Command realized that they were taking soldiers away from the front lines on the ground. Having recognized the need for a dedicated force with which to defend against enemy boarding actions, the Marine Corps was born. Naval Marines undergo some of the most grueling training there is to offer, and are exceptionally skilled at the close quarters combat one would encounter on board a ship.

If you have anymore questions, please contact your Naval liaison. The Naval liaison is available by DM and Discord channnel.