2.1. Adversaries are forbidden to operate in the Rebel Alliance's territory, are subject to arrest, and impoundment of their assets.
2.2. Arrested Adversaries will be held until they / their organization no longer pose a threat to the Rebel Alliance.
2.3. Adversaries are under a trade embargo, disallowing any commercial dealings between them (and its members) or individuals, and official Rebel Alliance entities, including nationalized companies and private sector affiliates.
2.4. The Official Rebel Alliance entities, listed above, are exempt from the embargo for the purpose of purchasing their own stock.
2.5. A consensus from the RAC is needed to bypass the above embargo for individual sales, purchases, or trades.
2.6. Citizens of the Rebel Alliance are not legally bound by the trade embargo, but are encouraged to abide by it.

The Rebel Alliance Warrant List was created for the purposes of bringing wanted criminals to justice and rewarding the assistance of privateers for the capture of enemy agents. The Rebel Alliance does not condone the mistreatment or execution of prisoners and is not responsible for such actions by any third party towards individuals for whom warrants have been issued. In accordance with Rebel ideals, only live captures will be rewarded.

To claim a bounty please contact the Rebel Security Force.

Please find the lists of wanted individuals and enemy combatants below.

The Alliance offers reward for the LIVE CAPTURE of The Sith Imperium Leaders listed below. The 3.3 billion reward credit will be offered on the transfer of custody to Rebel Alliance or the Jedi Order officials. No bounty will be paid if the wanted individual is deceased. 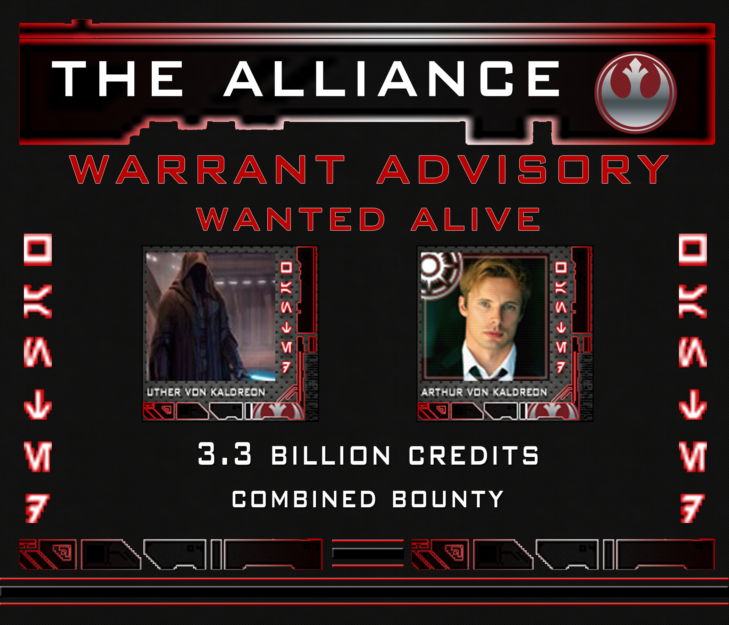 The Rebel Alliance also offers reward for the live capture of enemy agents. The Reward credit will be offered on the transfer of custody to Rebel Alliance officials of the Warrant.

These individuals were apprehended and currently are in Rebel Alliance custody.